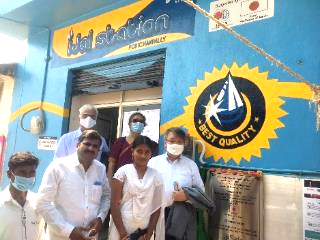 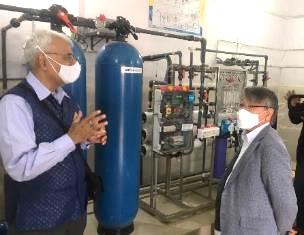 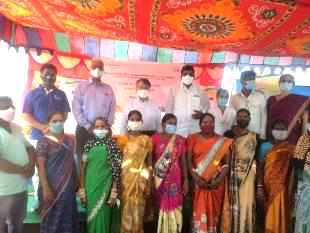 Members of Safe Water Network India and the local group in charge of maintenance and management of the plant
On 28 March 2021, Mr. Taga Masayuki, Consul-General of Japan in Chennai, and Mr. Ravindra Sewak, Country Director, Safe Water Network India, inaugurated water purification plants in Medak District, Telangana. This project was funded with a US$50,235 grant through the Japanese government’s Grant Assistance for Grassroots Human Security Projects (GGP) and implemented by Safe Water Network India, a non-profit organisation working to bring clean and affordable drinking water to communities across India by building water purification facilities.

The project brought water purification plants developed by Safe Water Network India, along with solar panels and other equipment, to the villages of Shankarampet, Podchenpalle, and Kodpak in Medak District, where communities have been facing serious water quality issues. As a result, safe and affordable water will be supplied in a sustainable manner, improving people’s health and living conditions.

During the ceremony, Mr. Sewak said: “We thank the people of Japan for their grant to set up drinking water stations that bring safe and affordable drinking water access to more than ten thousand people in three villages. We also thank the gram panchayat of the villages and the district administration of Medak for their support in providing the land, water source and electricity to install the plants.”

Consul-General Taga said: “We are pleased to cooperate with Safe Water Network India through GGP in its efforts to provide safe drinking water to the people of India. I strongly hope that Safe Water Network India and the three villages will effectively utilise the water purification plants, thus improving people’s health, and moreover, this project will be remembered as a symbol of friendship and cooperation between the people of Japan and Telangana, India.”